Welcome to the website of The One & Only Bandaloni One Man Band!

Bandaloni, the One Man Band, has been performing professionally since 1999. While living in Calgary, he constructed his first apparatus or ‘Rig’ as he likes to call it, out of a kick drum that was sitting on his back deck. He had been using it for many years as a beer cooler and was no drummer by any stretch. Built it, rehearsed a handful of songs and headed out on the long road to where he is now. His background in Art (BFA in Sculpture) plus sales (audio gear) and of course music, proved to be a perfect storm of sorts to integrate all of the for-mentioned skills into a successful One Man Band. Fabricating, playing and selling his One Man Band show has always been the focus, keeping the wheels greased and always moving forward. Providing entertainment for corporate events, fairs, festivals, sporting events and many more esoteric engagements.

Bandaloni was very inspired to become a One Man Band by a biography he read in the 1990’s called and about ‘The Great Farini’. He was a fascinating Canadian of the 19th and 20th century who managed to accomplish many feats in his life besides being a top notch entertainer and show promoter. His name was William Hunt but changed it to Guillermo Farini to sound more exotic just as this One Man Band was inspired to do the same with ‘Bandaloni’ or more to the point, ‘a Band alone’.

(Bandaloni: “I always thought the name was pretty obvious as a ‘band alone’ but with the ‘i’ thrown at the end to make the obvious more subtle but I’m still amazed at the people that don’t make the connection”) In 1999 to pay his respects, he made a pilgrimage of sorts to ‘The Great Farini’s’ gravesite in Port Hope, ON. That was his very first summer travelling and entertaining as Bandaloni, the One Man Band.

It’s not unusual now for Bandaloni and his One Man Band to spend several months in any given year, touring in his ‘Van-aloni’ across the continent. Bandaloni’s calendar is primarily filled with state, provincial, national and county fairs on both sides of the Canadian/US border with a generous amount of corporate events plus various themed festivals thrown in for good measure.

Besides this new website, CD-recording and documentary for 2014, He is planning a One Man Band reunion tour…yes, that’s right, a reunion tour! A very much tongue-in-cheek kind of tour with new songs, schtick and equipment to provide that freshness that he desires to keep audiences enthralled and himself sane. This is in keeping with a credo he embraced when he first started performing as a One Man Band many years ago; that was to push this unique ‘art form’ as far as he could go with it. The journey is far from over for Bandaloni, the One Man Band as new experiences, audiences and adventures await just beyond this thing called the ‘World Wide Web’! Join him!

The following is a brief overview of the information you will find on the website: 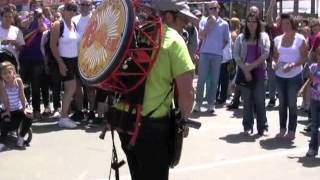